Tired of reinventing JSFUtils or FacesUtils utility classes for every JSF web application and/or homebrewing custom components, taghandlers, etc to workaround or enhance some general shortcomings in JSF? OmniFaces may be what you’re looking for!

OmniFaces is a utility library for JSF 2 that focusses on utilities that ease everyday tasks with the standard JSF API. OmniFaces is a response to frequently recurring problems encountered during ages of professional JSF development and from questions being asked on Stack Overflow.

Besides utility classes for working with the JSF API from Java code, such as Faces and Messages, and utility and enhanced components, such as <o:highlight> and <o:viewParam>, OmniFaces will include various general converters, validators and Facelets tag handlers. These will range from “all-or-none” validators to automatic <f:selectItem(s)> converters. There are also specialized handlers, such as a full ajax exception handler and a combined resource handler. CDI specific features are available such as transparent support for injection in @FacesConverter and @FacesValidator, an improved @ViewScoped which immediately destroys on unload, and web socket based push via <o:socket>. For a full overview of what’s all available in OmniFaces and several live examples, look at the showcase.

An important design goal will be to have as few dependencies as possible and to be minimally invasive.

Since OmniFaces 1.6 there was an optional dependency on CDI, which turned out to be troublesome in some outdated environments, so they were since version 1.10 removed from version 1.x for a better compatibility with those environments. The CDI specific features remain in version 2.x whereby the CDI dependency is thus made required. Version 1.x users who are already using CDI specific features on a JSF 2.1 environment should be able to effortlessly migrate to version 2.x. OmniFaces 2.0/2.1 is unofficially backwards compatible with JSF 2.1. OmniFaces 2.2 is not anymore backwards compatible with JSF 2.1.

Since OmniFaces 2.3 there is a required dependency on JSR356 WebSocket which is already available in any Java EE 7 container and in even earlier versions of servletcontainers (Tomcat supports it since 7.0.27 and Jetty supports it since 9.1.0).

All OmniFaces versions have an optional dependency on JSR303 Bean Validation which is only required when you start to actually use <o:validateBean> or JsfLabelMessageInterpolator.

OmniFaces should principally integrate perfectly well with most other JSF component libraries. Even more, the OmniFaces showcase application uses PrimeFaces. If you encounter problems in combination with a specific component library, then by all means report an issue. We’ll investigate if it’s caused by OmniFaces or the component library in question and fix it or propose a workaround solution, depending on the nature of the problem. Note that OmniFaces is due to the mandatory Servlet API dependency not compatible with portlets.

It is a matter of dropping the OmniFaces 3.4.1 JAR file in /WEB-INF/lib.

Maven users can add OmniFaces by adding the following Maven coordinates to pom.xml of the WAR project:

For users who are still on JSF 2.2, use 2.7.3 instead. The 2.x branch is in maintenance mode. For users on yet more outdated environments who can’t/won’t use CDI, use 1.14.1 instead. It doesn’t contain anything from CDI nor new things which were added in 2.x, but it does contain enhancements and bugfixes to existing 1.x things. Note that there is no 1.15 nor 1.16. The 1.14.1 is latest version of the 1.x branch which is also in maintenance mode.

The OmniFaces UI components/taghandlers and EL functions are available under the following XML namespaces:

OmniFaces is designed as a WAR library (web fragment library) and therefore can’t be placed elsewhere in the webapp’s runtime classpath outside WAR’s own /WEB-INF/lib, such as EAR’s /lib or even server’s or JRE’s own /lib. When OmniFaces JAR file is misplaced this way, then the webapp will be unable to find OmniFaces-bundled JSF/CDI annotated classes and throw exceptions related to this during deploy or runtime. To solve it, put back OmniFaces in WAR’s /WEB-INF/lib. Also note that you shouldn’t have duplicate OmniFaces JAR files, otherwise CDI will throw exceptions related to ambiguous dependencies during deploy.

Version history can be found in “What’s new” page at the showcase.

The Definitive Guide to JSF in Java EE 8 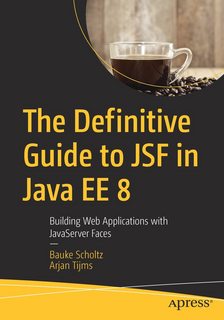 The Definitive Guide to JSF in Java EE 8 is since July 11, 2018 available at Amazon.com. This book is authored by the creators of OmniFaces, Bauke Scholtz and Arjan Tijms. This book is definitely a must read for anyone working with JSF or interested in JSF. It uncovers the best practices and hidden gems of JSF. The source code of the book’s examples can be found at GitHub. Mastering OmniFaces is since October 5, 2015 available at Amazon.com. This book was created in cooperation with the creators of OmniFaces, Bauke Scholtz and Arjan Tijms. From the beginning on, they worked together with Anghel Leonard and Constantin Alin to get this book ready, and have reviewed it from top to bottom.

A little over 500 pages, this book goes into depth identifying general JSF problems and describing how OmniFaces has solved it, hereby uncovering several patterns and tricks. Basically, the working of every OmniFaces component, taghandler, converter, validator, and several handlers and listeners is break down in the book in a problem-to-solution approach. Reading this book is a true learning exercise as to exploiting JSF API, creating custom components, renderers, tagfiles and what not provided by JSF API in order to solve common problems.

A must read if you also like Mastering JSF 2.2 from the same author! If you have specific programming problems or questions related to the OmniFaces library, feel free to post a question on Stack Overflow using at least the jsf and omnifaces tags.

If you have found bugs or have new ideas, feel free to open a new issue.

If you have general feedback that’s not either a question, bug report or feature request, or if you have a review/rating, please feel free to leave it at OpenHUB.

OmniFaces in the worldwide news and literature